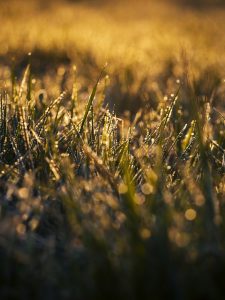 Once, at the start of a family picnic, when my then five-year-old niece seemed to have disappeared from the yard, I asked my brother to give me a minute to find her. I believed she might have gone to her “secret place.” I had the privilege of having its location divulged to me, her “favorite aunt.” There she was, tucked away in a tiny grove of evergreens, lying flat on the ground.

I tapped her gently on the shoulder and asked her the moment our eyes met what she was doing there. She had a surprised look on her face, as if I ought to have known the answer: “Aunt Susan, can’t you see that I’m listening to the grass grow?”

There, amid a raucous family gathering, this little girl revealed in her backyard hideout a “habitat of holiness” and there, for a precious moment, I laid down beside her on the soft pine needles, and she and I listened together to the grass grow.

In the routines of daily life, it is easy to overlook these signals of transcendence and the hidden beauty they contain. And yet, despite our blindness to them, they may break into our consciousness at any moment.

In his novel, Zorba the Greek, Nikos Kazantzakis depicts a character he names the boss. One day, as he walks toward the shore, he notices a cocoon dangling from the branch of a tree from which a butterfly is about to emerge. Being the boss, he decides to hasten the process of this miracle of metamorphosis by blowing his hot breath on it. As planned, the butterfly comes forth under his analytical gaze, but its wings are so shriveled that, after a brief flutter, it expires. He feels like a murderer and weeps with remorse. He knows without question that he must change the arrogant thrust of his life or risk losing respect for the habitats of holiness his friend Zorba has been teaching him to honor.

The danger of becoming all labor without leisure, all action without the least bit of contemplation, was brought home to me after several days of exhausting travel in South Africa. Following a full schedule of demanding speaking engagements with my colleagues, there was no need for them to persuade me how badly I needed a break.

A “habitat of holiness” presented itself at midday when we allowed ourselves to be late for the next engagement, drove to a viewing site, and walked a few paces to the edge of a famous canyon that riveted our attention. Almost instantly my fatigue began to lift. Clock time stopped as if it had been pierced by the eternal. Awe replaced our arrogant rush to beat our wristwatch.

Though one friend who lived in the region had been to this destination before, he, too, was at a loss for words to describe its incredible beauty, highlighted by eagles soaring on currents of crisp, cool air. A thousand pairs of eyes could not contain the wonder of this place and its power to draw us to prayer.

No one spoke. Words would have been superfluous. They would have cracked open the canopy of silence that bound us mysteriously together. There was nothing to say or do. It was enough to be present to the Divine Presence that dwelt in these untamed labyrinths of stone etched with lush vegetation. The sheer marvel of standing at the edge of the canyon aroused in our city-dweller’s heart praise for the glory of God.

Unaccustomed as we were to seeing wildlife outside a zoo, it was astounding, as our drive again got underway, to view within calling distance a herd of gazelles and two giraffes crossing the road. At dusk, shortly before we arrived at our destination, we turned from the paved trail onto an unmarked road. We were in the wilderness, so it was not surprising that we saw unmistakable evidence of a herd of elephants. As daylight receded, we discovered more and more droppings! The road became rocky and dangerous, but we were not ready to reverse gear.

We turned a sharp corner, passed slowly over a dry riverbed, and, at last, there we were, surrounded by the elephants we had hoped to see. The bull bellowed his authority, warning us that we still had time to turn around and, with dusk upon us, so we did. We were thousands of miles away from home, in the wilderness of a South African National Park, and yet we felt embraced by another habitat of holiness. Our trip soon ended, but these gifted encounters with the natural world would never be forgotten. They reminded us to reset as the first aim of our life presence to the mystery shining forth in people, events, and things.

From soaring eagles to stomping elephants, we saw, if only for a moment, the harmonious blending of earth with heaven. Our prayers became like reservoirs of sacred energy, refilled by waves of recollection and participation, of contemplation and action. This trip symbolized that day when our soul will fly home free, carried by God’s hand through time to eternity.

June 2021: Place of Play in Our Spiritual Life